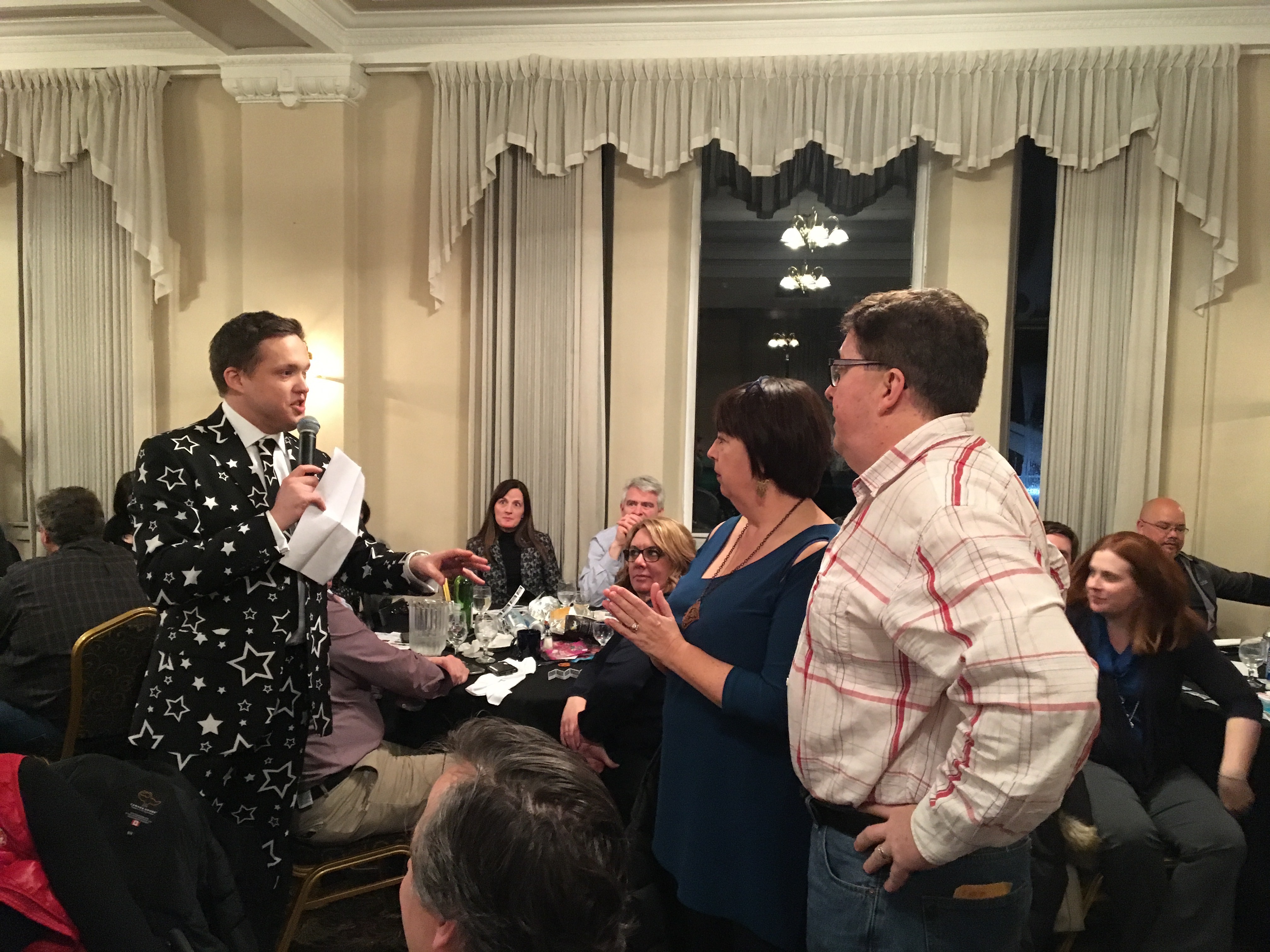 The 23 Best Corporate Events in Toronto 2019

Are you an executive assistant tasked with organizing the next social event? Has the boss demanded a team building activity is in order? Here are some of the current best Toronto corporate event ideas & team building solutions to choose from!

Some are easier to arrange than others and they vary over a range of budgets. Let’s have a look at these amazing corporate event ideas – in no particular order!

Ahoy there matey! One of the best corporate event ideas in the city – party boats offer corporate rates and available for private parties. Take a ride for a beautiful view of Toronto and the islands. The boat will take you in and around Lake Ontario whilst you look back to the GTA. If you drink too much you can blame it on seasickness… The Stella Borealis and Tall Ship Kajama are the most popular options, lifejackets provided…

Check out Bar + Karaoke which is a no-frills karaoke lounge at Yonge & Gerrard. This corporate event idea costs about $50 per hour for a 25-person room. With 1000s of songs to choose from you can release the inner Mariah Carey and let rip! Did you know ‘karaoke’ translates as ‘empty orchestra‘? Here’s a new list of karaoke venues from BlogTO It’s NOT a large session of Trivial Pursuit, more a British pub quiz with trivia, music, and jokes. Team up with your crack team of workmates and try to smash the HR team out of the park! Office rivalry, banter & knowledge combined in one easy to organize, hassle-free and cost-effective solution. Quiz Coconut has hosted over 900 nights for crowds between 20-300 people. They even have an authentic British host for extra gravitas. Check out Quiz Coconut to find out more about one of Toronto’s best corporate event ideas! Do you know your IBUs from your IOUs? This might seem ‘pale’ in comparison to other corporate event ideas Toronto has – but I bet you a pint it’s a great time. The space is available to rent out and fit in up to 200 people, which could mean a large rowdy crowd of team members enjoying the amber nectar. Sign up for a beer tasting session at Batch. They have brewery tours and also do full-on brewery tours for large groups.

Strike! The Ballroom is Toronto’s only (as far as I know) downtown alley. Bowling’s been done many times, but it makes this list as it still seems a popular corporate event idea in the city and a fabulous way to release your inner child. Watch Bill from accounts try to hammer the heaviest ball towards the pins, only to miss spectacularly and gutter it all the way down. They have a private space available for events which is also useful to know, for hosting non-bowling events of your own, such as a quiz night or awards party. A cliché team building solution is the Escape Room. Escape Rooms are ten-a-penny and there is a deluge of average offerings in Toronto. The one in Casa Loma is different with themed actors as you try to solve pretty taxing problems in this Prohibition-themed dungeon escape! Other themed escapes are possible and around Halloween there seems to be many to choose from. Plus side: if you don’t escape, the boss can’t really expect you in work the next day can they?

Well, this IS Canada! Why not get in touch with The Backyard Axe Throwing League? Threaten your colleagues with your axe wielding skills and dominate the office water cooler for life. There are various safety precautions which are well explained and necessary. This isn’t the most suitable for the less able (or less aggressive?). Either visit Port Lands or the other location which can be found on Sterling Road. Did you know axes have been used since around 3,700BC, around the end of the stone age and the beginning of the bronze age? The Shop Toronto (College and Dufferin) is a multi-idea creative space focusing on design and crafts and another office event solution worth mentioning. Get to know your colleagues by seeing what they come up with when their creative juices start flowing. You can even sell your creations through their online shop if you manage to unleash the inner Michelangelo!

If you would like something less alcoholic for your next corporate event Toronto, try Propeller Coffee roasting in the Junction or Pilot Roastery (east side). They offer events including learning how to buy beans and roast coffee as well as coffee cuppings and brew demos. We all need coffee after all, and with a constantly exploding market it’s here to stay! Did you know caffeine is the World’s most widely used psychoactive drug? Get a quote for your next event

This learning experience helps you to make your own fantastic dishes. Dish near Dupont and Spadina offers fun corporate team building ideas. Up to 40 people can take the course at once, which includes wine and snacks, an hour of cooking, and then a full-service sit-down dinner of your own creation. An original event solution that is affordable and suitable for all ages. New: try Cirillo’s Culinary Academy for a stylish, tasty experience! Head over to Archery District for this high-energy corporate event idea! A version of indoor paintball without the paint – firing foam-tipped arrows at your work colleagues. Less team building, more team destroying… Just don’t aim all of the arrows at your boss – they might see straight through you! Venues in Toronto and Mississauga. Phwoar! A cheap solution to take the team out for a bit, head down to Woodbine Beach and take advantage of the many beach volleyball courts. All you need is a ball – the sunshine, fresh air and exercise are free. Through the summer you can almost rely on any day of the week. Definitely one of the corporate event ideas that are not suitable for the winter parties though! Get a quote for your next event

An active solution for your corporate event idea would be a scavenger hunt. Varied themes, such as historical, cultural or culinary; taking you around the city as you run through Toronto answering tricky and humorous trivia questions. There are eight to choose from including Murder at the Royal Ontario Museum and a Haunted one. Get in touch with Urban Capers for more hunting information.

The most daredevil-ish team building activity on this list! The CN Tower was the tallest man-made structure in the world for 32 years and is recognized all over the World. If you are feeling brave then take a walk on the windy side – the CN Tower Edge Walk is fairly self-explanatory. From April onward, you can strap yourself in and hang on for dear life 1100 fete in the air, day or night. It’s one way to bond with the team – through fear. It costs quite a bit though, it’s the most expensive on this list probably!

No longer a low-interest sport at the Olympics played by people you’ve never heard of… now ping pong is trendy! Toronto Corporate event ideas like this are suitable for all ages and backgrounds however they do require a small amount of athleticism. You do get to fire table tennis balls at your senior colleagues at SPiN and it is a good place to go after work or to hire for a private group session. Pick a paddle, build, bond and bash your opponent into oblivion….with a small plastic ball. This team building activity is described as “10,000 square feet of awesome,” which sounds good to me… Pursuit OCR is a ‘playground for adults’. Take the workforce to battle 19 obstacles, including an adult ball pit. The obstacle course come racing venue can be hired for groups and corporate events, and a team leader can help facilitate races and games. It’s a new, fun solution for the holiday party. It’s only in its second year and proving very popular. Activity beckons for those with lots of energy however for the less able it isn’t really suitable. Downtown – Queen and Dufferin.

It’s a sport – but not one that’s going to work up a sweat unless you become frustrated with that glow-in-the-dark green ball that won’t go in the hole on the 12th green.  For one of the corporate event ideas here that is tried and tested but still easy and enjoyable, go for this indoor mini version of the most testing of sports. The courses offer 3D obstacles in a variety of themes, set to music. And the best part is, you don’t have to be any age and any ability. Two in the GTA to ‘drive’ to… Putting Edge in Richmond Hill or RINX at North York. Jim Wright of the North Toronto Croquet Club wrote to me suggesting bowling and croquet for this list. He says, “it’s outdoors, in a beautiful setting and inexpensive”. He also says it builds last team skills, which is why we’ve included it in this list. Jim – we can’t wait to try it in the summer! 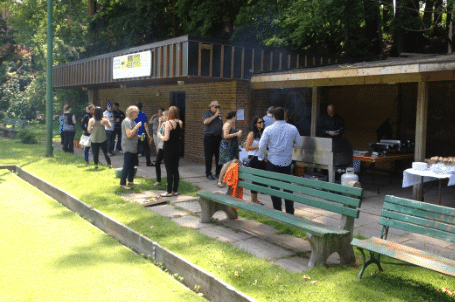 Not all work departments are huge. If you have a team of 5-10 or so then this is an idea for a smaller group. North of Toronto this corporate event idea is near Downsview Airport. We tried the Rage Room, where we were given protective suits and let loose with baseball bats and crowbars! In the room with a range of china, plates, ornaments, printers… and the idea is to smash them to smithereens! Check out the Rage Room here and bond over a mutual hatred of printers and have a cathartic afternoon. They also give you a video of you having a smashing time at this corporate event idea – here’s a peek:

New to Toronto corporate events: in the Roundhouse building downtown and chocked full of arcade games this is a haven for all nerds and closet nerds. Do battle over an air hockey machine and win tickets which can then be redeemed for all sorts of life changing prizes. There are lots of events on and it can be booked for private parties.

Quiz Coconut now offer a quickfire buzzer style trivia component, with more of a game show feel which is new to Toronto corporate events. Guessing answers from clues that get increasingly more specific. Buzz early for more points and take a bigger gamble! Or wait for more clues, but will your opponents get in there first? Team building ideas available – check out the packages here. 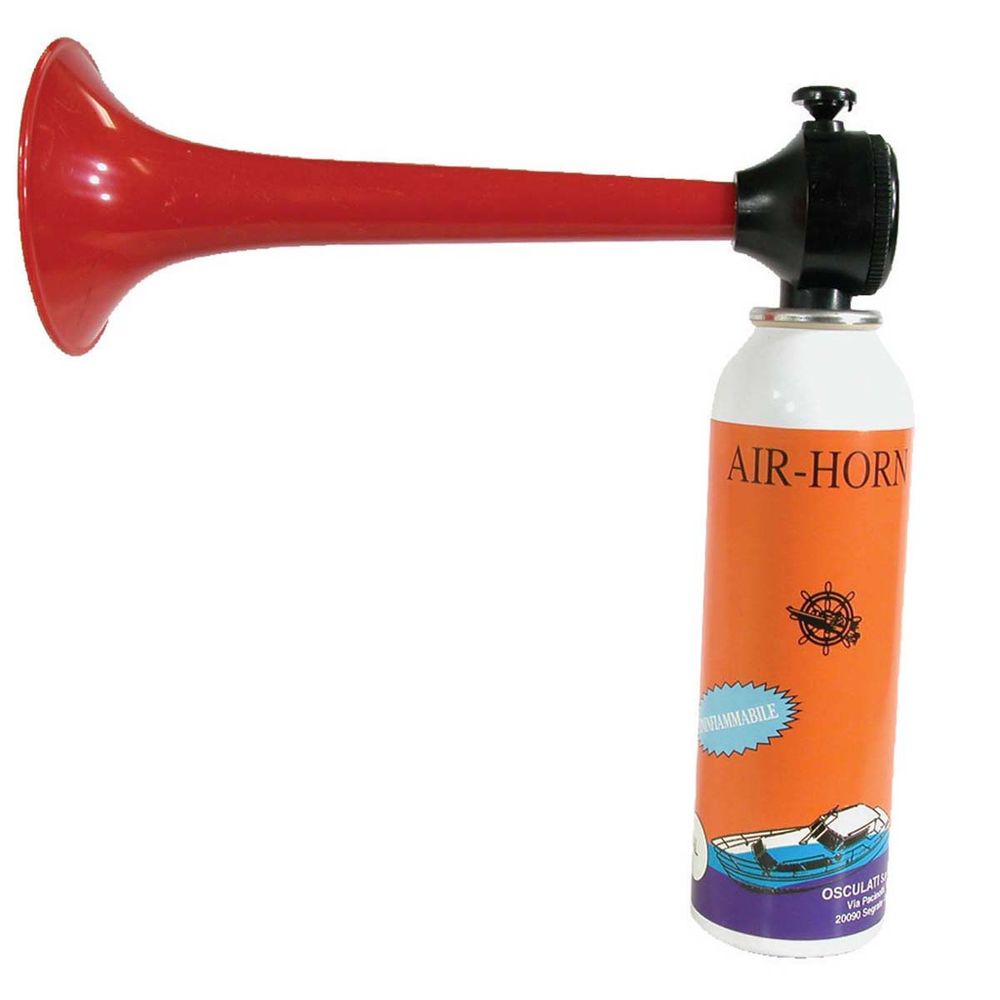 New on the scene in Leslieville, we tried out Lob recently and had a great time. Downstairs in an unassuming basement you find a beautifully curated bocce ball 9-hole course. As a corporate event idea you would form a team of four, grab your ball sacks (that’s what they call them…) and throw your best efforts on the shiny new course. Take a beer with you for good measure. The site has details and how to play. 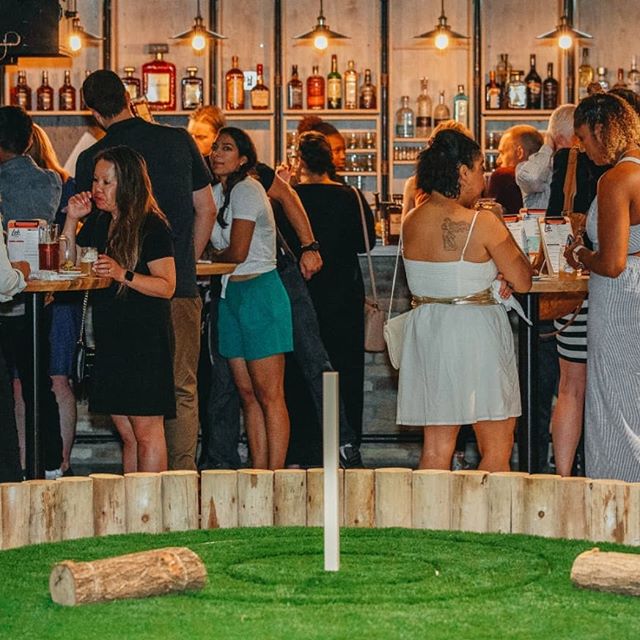 Also new on the scene, Par-Tee Putt can be found on Duncan St between Richmond and Adelaide. It boasts 27 holes, with a funky spin on the classic mini golf. We’re yet to try it but it looks fun! 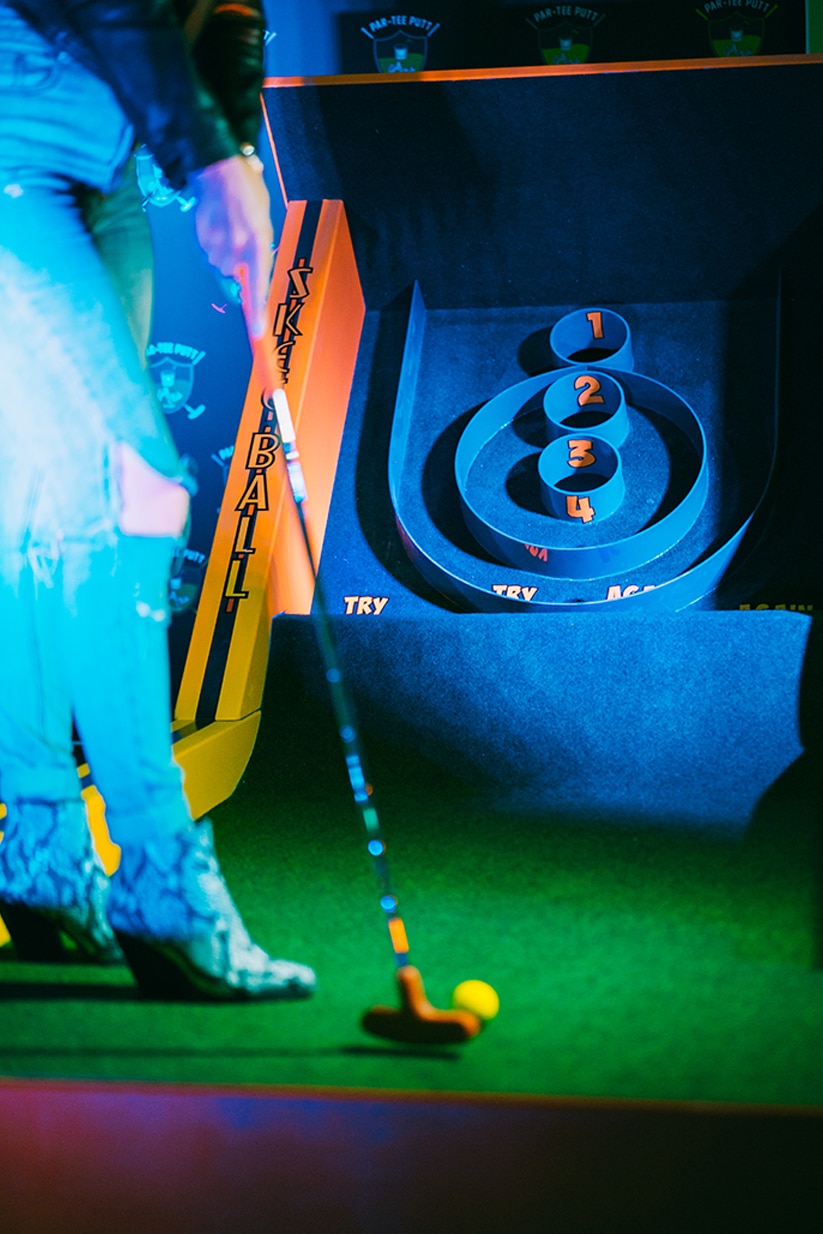 If You Aren’t Bothered With Any Of This Time Wasting , Get in Touch With Quiz Coconut Today And Let Us Take Care Of You!

There have got to be some other good options out there we’ve missed…Suggestions? Please get in touch! James@quizcoconut.ca